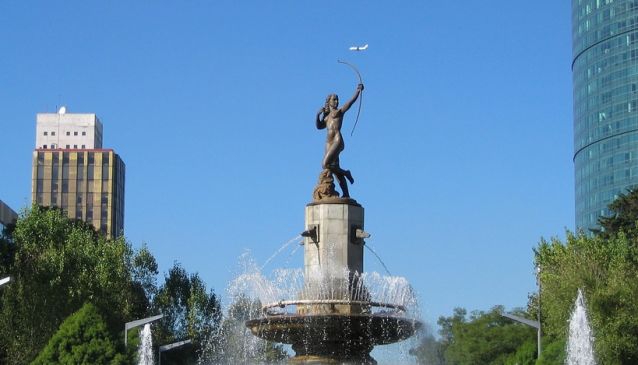 La Fuente de la Diana (The Fountain of Diana) is a monument located along the famous Paseo de la Reforma. It stands as a tribute to the Roman goddess Diana, who was the goddess of the hunt, the moon and the birthing. Designed by architect Vicente Mendiola Quezada and sculpted by Juan Olaguíbel, it was inaugurated in 1942 by the then president Manuel Ávila Camacho. The sculpture depicts Diana pointing an arrow at the northern skies, hence its former name 'The Arrow Thrower of the North Star'. Today it stands as an iconic monument in Mexico City.

The avenue Paseo de la Reforma is famed for its many monuments. It runs diagonally through Mexico City and was modelled after the Champs-Élysées and such famous boulevards. It is lined with modern buildings and showcases El Ángel de la Independencia, the Alameda - the monument to the revolution, alongside many other famous sculptures and monuments.