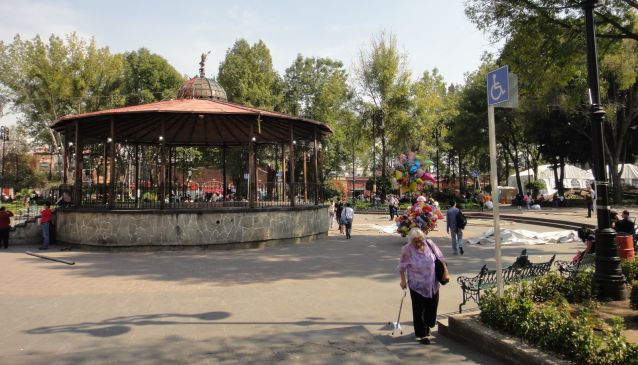 Standing at the heart of Coyoacan, this beautiful garden is a traditional meeting point of this borough's neighbors, as well as families, kids, young people, couples, expats and, basically everyone! Among the many attractions surrounding this popular place, you can find a picturesque kiosk with a glass dome crowned by a bronze eagle as well as a statue of Mexico's founding father, Miguel Hidalgo, for which this plaza receives its name.

The Hispanic Town of Coyoacan was founded in 1521 by the first Spanish conquerors. It preserves its colonial majestic aspect up to date. The kiosk was donated by Mexican dictator Porfirio Díaz as a symbol of the restoration of the Republic after the French invasion. You can also find many great restaurants, bars and coffee places around this square as well as a crafts market, a public library, the Municipal Palace, and the beautiful Catholic temple of San Juan Bautista. Walking around this place should be a MUST in your trip in this city!