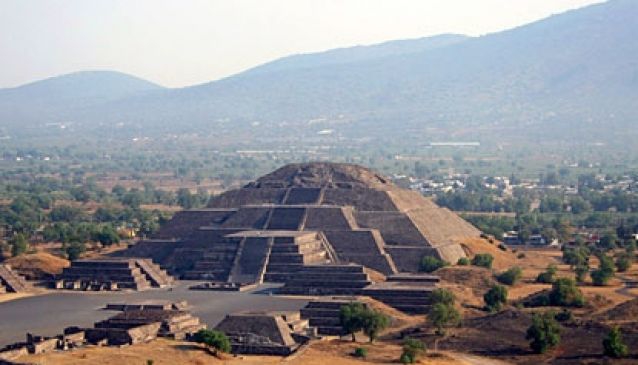 Directions to Pyramids of Teotihuacán

Approximately 30 miles north-east of Mexico City lie the ancient ruins of the city of Teotihuacán.

Like many of the archaeological sites in Mexico, Teotihuacán guards secrets that archaeologists have yet to unravel. The origins of Teotihuacán are uncertain, although it is assumed that some of the inhabitants arrived from the Valley of Mexico after an eruption of the Xitle volcano caused major devastation in the region. Construction of the city probably began in the first two centuries BC.

Scholars in archaeology agree that this is Mexico's most important archaeological site and if you plan to visit Mexico to understand more of its history, then this is a compulsory trip. See where human sacrifices were made, marvel at the pyramids rising from the dust and have a close look at the tombs.

If you want to take photographs and videos with a tripod, a permit is required. Comfortable walking shoes with a non-slip sole are essential and remember to drink lots of water. Vendors sell light snacks and chilled water around the area.

Modest admission charges apply and there are concessions for students, children and seniors. On Sundays, admission is free for Mexican citizens and ex-pats.