December in Mexico: Beyond Christmas' Magic

A lively, colorful, jubilant and delicious month for its many traditions and celebrations.

Every December, Mexico becomes a lively, colorful, jubilant and delicious country for its many traditions and celebrations. Throughout the country, there is a 26-days festival locally known as “Guadalupe-Reyes” Marathon, starting on December 12 (the day of the Virgin of Guadalupe) and lasting until January 6 (the day of the three Wise Men). It is a period of intermittent parties where you will not only witness the blend of centennial beliefs and customs, but also, the warmth and merriness of Mexican people’s hearts. Find out what this marathon is about in Mexico City!

Day of the Virgin

Mexico is a Catholic country, and most of its people are devout religious believers, especially when it comes to the Virgin of Guadalupe, Mexico’s sacred mother.

It all started in 1531, ten years after the defeat of the Aztec empire by the Spanish conquistadors. On December 9, an Indigenous man named Juan Diego was on his way to a church to attend mass when he saw, for the first time, Mary the Virgin standing on top of Tepeyac Hill (where nowadays the Basilica of Guadalupe stands). She asked him to tell the Archbishop to build a temple where everyone could find her with prayers. When Juan Diego did so, the Archbishop didn’t trust his word and asked him to bring actual proof.

On December 12, Juan Diego saw the Virgin again. She told him to climb the hill, cut the roses laying there and give them to the Archbishop. He followed her instructions and gathered with his cloak as many flowers as he could. Once he was with the Archbishop, he unfolded his cloak, the roses fell on the floor and the image of the Virgin revealed printed on the fabric. This Virgin had brown skin and dark hair, just like local people, with a peaceful and tenderhearted face.

Since then, every December 12 the nation celebrates the appearance of the Virgin. Millions of people from all around the country go on pilgrimages to the Basilica of Guadalupe to adore the Queen of Mexico, making it the third most visited religious sanctuary of the world.

On December 15, Mexicans start a nine-day festival called “Posadas”, which re-enact the peregrination of Mary and Joseph from Nazareth to Belem. According to the legend, when they arrived to Belem, the Virgin was about to give birth. They asked for lodging in several houses, but everyone refused to host them. Finally, someone offered them to spend the night at a barn, where Jesus was born. This Biblical passage is known as “Las Posadas” (the lodging) and it is celebrated during the nine days before Christmas representing the nine months of pregnancy of Mary.

This tradition has existed for more than four centuries in Mexico, since 1587. At first, it took place within the churches’ atriums, then it extended to the streets and nowadays Mexican families organize posadas at home. Traditionally, two kids play Mary and Joseph, and the rest of the guests are part of the procession. They have to walk to the house’s door and sing a popular song asking for lodging, while holding a lit candle. The family hosting the posada sings back refusing to open the door, but when Mary and Joseph reveal their identity, the “innkeepers” warmly accept the entire procession to enter the house and they all sing together to celebrate the occasion, while lighting up sparklers. 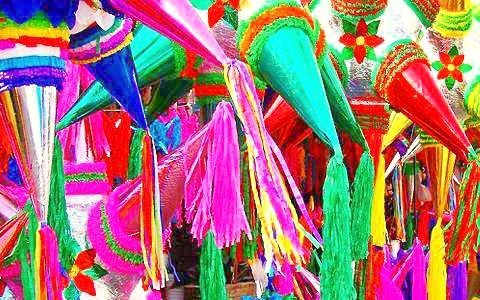 Right after, the most exciting part of the night starts: breaking the piñata (a container of papier-mâché, pottery, or cloth filled with treats). Typically, these piñatas have seven points after the seven deadly sins. Therefore, breaking the piñata represents the struggle against evil and temptation. Each participant beats the piñata blindfolded, representing blind faith. When the piñata breaks, the treats fall as a reward for fighting the sins with faith.

After the piñata, the hosts offer a feast: warm punch made with different seasonal fruits, buñuelos (fried sweet dough with syrup), tamale and other Mexican dishes. At the end, small bags filled with candy are given to each guest.

In Mexico, the main commemoration of Christmas takes place during the night of December 24. This is the night of the last posada and the birth of Jesus Christ.

Usually, this is a family celebration involving a delicious and vast late dinner, often happening around midnight. Various spectacular dishes are offered, such as white rice with “romeritos” –a wild plant poured with mole (a sauce made of chocolate and spices), potatoes, cactus and shrimps; stuffed turkey; bacalao (a typical Spanish recipe of Codfish); beet salad (known as Christmas Eve salad); pozole, among many others.

Right after dinner, there is a toast and people open their presents. The next morning, all the kids open the presents that Santa Claus (or baby Jesus, depending on the tradition of each house) left during Christmas Eve. Although Santa Claus is not a Spanish tradition, it has become very popular in the last 60 years in Mexico. 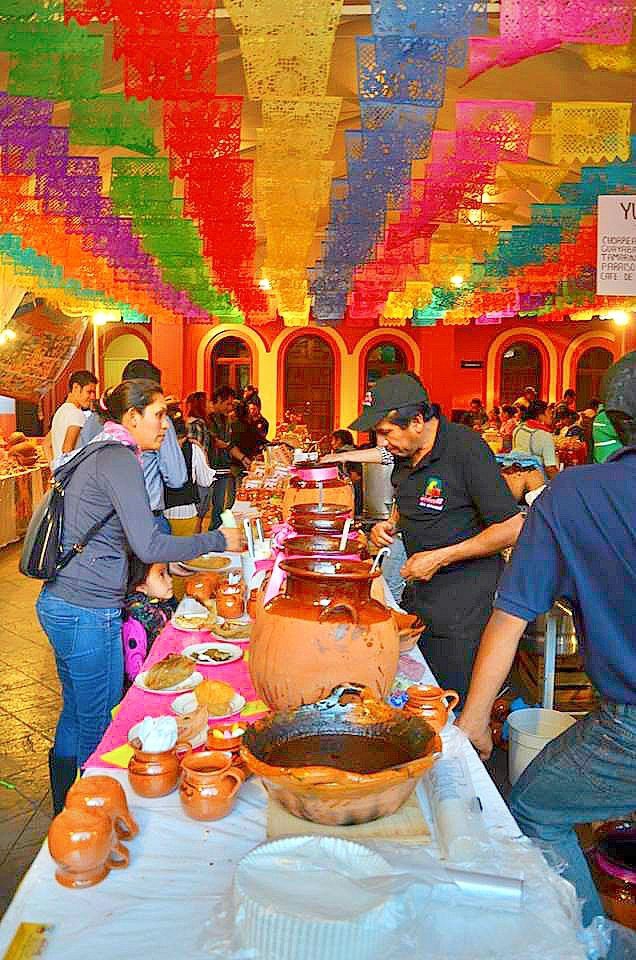 During the night of January 5, the Three Wise Men (Reyes Magos) arrive to each house to leave presents for the kids, just as they did when Jesus Christ was born. Some days before, Mexican kids write letters to the Wise Men asking for toys or other presents in reward for having behaved well during the last year. Sometimes the kids tie these letters to balloons in order to make their message reach the sky.

Therefore, on January 6 all the kids wake up full of joy and illusion to find out what the Wise Men left them at home. At night, the whole family gathers together to have some hot chocolate and eat the “Rosca de reyes” (Kings’ ring), a cake pastry decorated with dry fruits and sugar. This bread usually has a hidden figurine of child Christ; whoever finds it will be blessed by Jesus. In exchange, that person will have to take the figurine to a church and offer tamale to the rest of the family on February 2nd. This moment culminates the Guadalupe-Reyes Marathon.

Although these are the main celebrations in Mexico, there are many others that came from all around the world, such as decorating a Christmas tree, eating fruitcake, setting up a “Nacimiento” (an arrangement of figures depicting the birth of the Christ Child), performing “pastorelas” (shepherd’s plays), organizing exchanges of presents, celebrating the day of the Holy Innocents on December 28, eating 12 grapes on New Year’s Eve, and many more.

If you were wondering where to spend a different and magical Christmas season, Mexico City definitely should be your first choice. Mexicans, as warm as they are, will invite you to their posadas, dinners, parties and welcome you to the rest of their traditions. Moreover, you will be surrounded by joy, a peaceful energy and delicious food (the mild weather doesn’t hurt either!). Come and have an unforgettable and unique Christmas celebration! 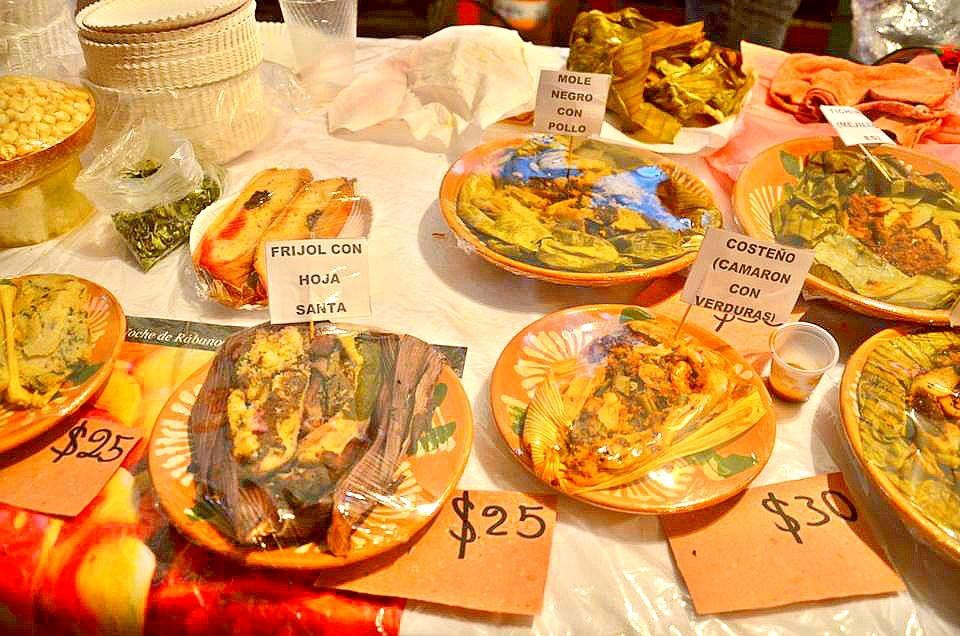