Mexican Day of the Dead

In Mexico, a mystical and ancient tradition is nowadays on UNESCO’s list of Intangible Cultural Heritage and has been inspiration of many artists, anthropologists, historians and anyone from around the world who has witnessed it: the Day of the Dead. Discover more about this magical date as well as some of the best places to experience it in Mexico City.

The origins of the Day of the Dead date back to the pre-Hispanic world, more than 3,000 years ago. Ancient cultures in Mexico, such as the Aztecs, Mayans, Purepepechas and Totonacas, conceived life and death in dialectic way –one could only exist because of the other. Many rituals emerged around this principle; for instance, these cultures used to preserve the skulls and show them in ceremonies as symbol of death and rebirth. Death was present in all their cultural expressions; a tradition that has been preserved up to now.

During the Aztec period, this festivity was celebrated in August and lasted a whole month. The goddess Mictecacihuatl led it, as she was the Lady of the Dead, the equivalent of today’s “Catrina” (an elegant female skeleton representing death). The whole festival was dedicated to the commemoration of departed relatives and children. 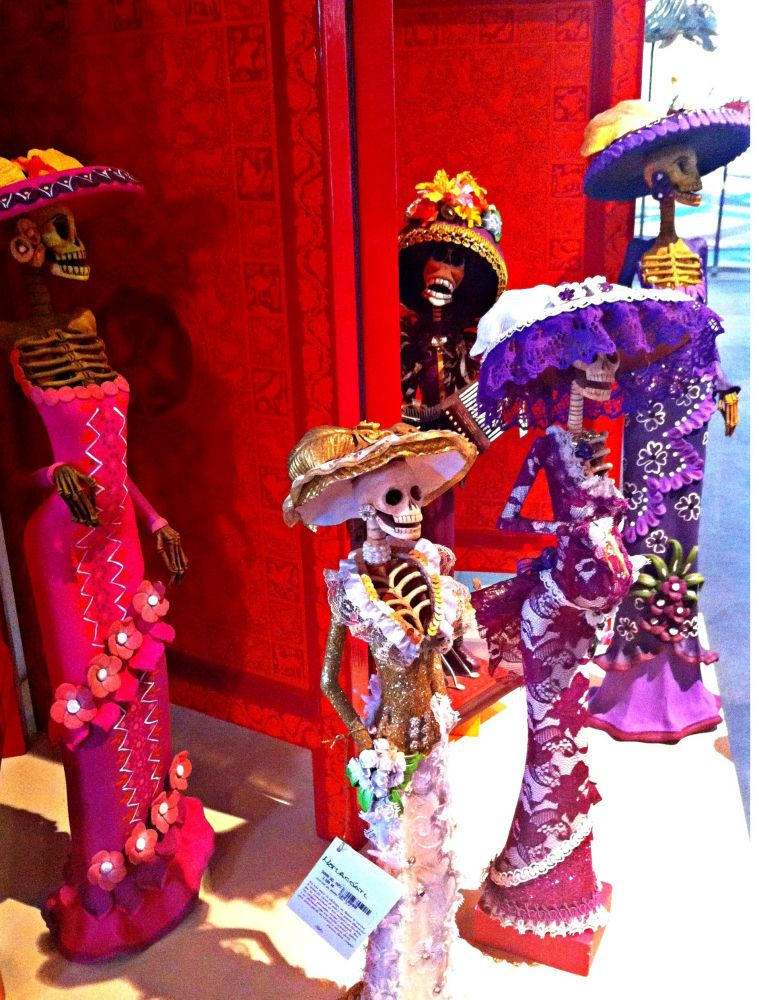 When the Spanish conquistadors arrived in the 16th century, they respected this tradition but moved it to the first two days of November, in order to make it match the Catholic Solemnity of All Saints and All Souls in an attempt to evangelize the local native cultures. All Saints and All Souls days commemorate known and unknown saints and the departed faithful who have not yet been purified, respectively. They take place just after Halloween, a festivity derived from the Celtic ritual of Samhain, which was also dedicated to the dead. Therefore, the Spanish evangelists merged together all these traditions, which has resulted in today’s Day of the Dead.

Yet, this celebration is not homogenous throughout the country. As Mexico is a multicultural nation, each town, ethnicity and social group adds different elements and meanings. That is why this tradition cannot be characterized as a uniform Catholic festivity, but rather as the result of a melting pot of Indigenous and European cultures, and thus, it is as vast and plural as Mexico itself.

According to the tradition, the souls of the children come back to this world on November 1st, but the main celebration happens on November 2nd, when the souls of the adults arrive. Beginning in the early hours of the morning, families go to the cemeteries to decorate the graves of their relatives with magnificent altars, as it is believed that this will help guide their spirits on a good path. 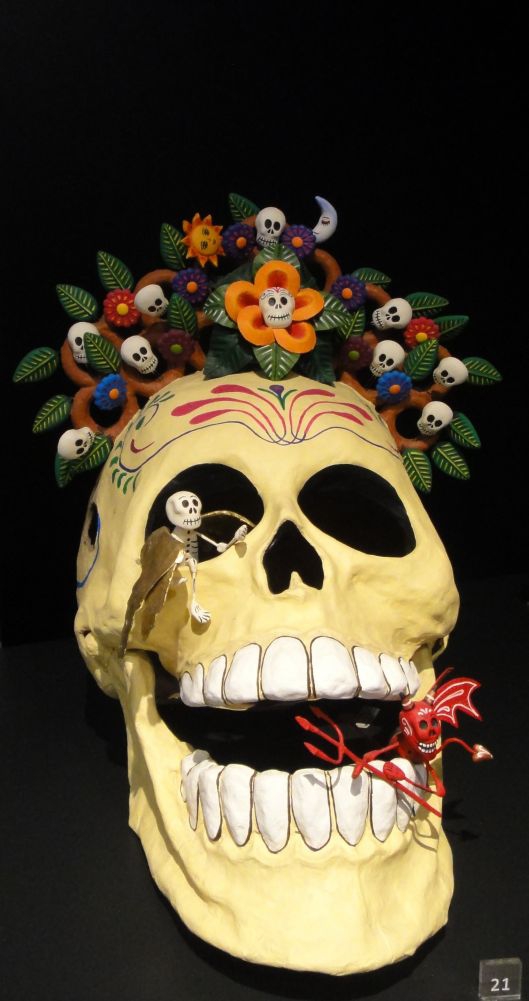 Altars and graves have candles and marigold flowers (the local name is “cempasuchil”) in order give light to the path of the souls. They are full of objects that their relatives used to cherish: toys in the case of kids, pictures, their favorite dishes, beverages, flowers, etc. It is common to find skulls made of sugar with the name of the dead, as tribute, as well as the classic “Pan de muertos” (bread of the dead), which is a sweet bread that usually has bone-shaped phalanges pieces on top. Many families also set up altars at home in order to welcome back their dead relatives.

In addition, Mexican people use to write verses called “Calaveras”, where the Catrina makes fun of the living by pointing at some specific characteristics or features and condemning them to death. Each year, you can usually find them in the newspapers making fun of politicians and other famous people.

In sum, in Mexico the death is perceived in a multifaceted manner: with solemnity and festivity, with jokes and respect, with religious devotion and commonality. All of this is present in the Day of the Dead. 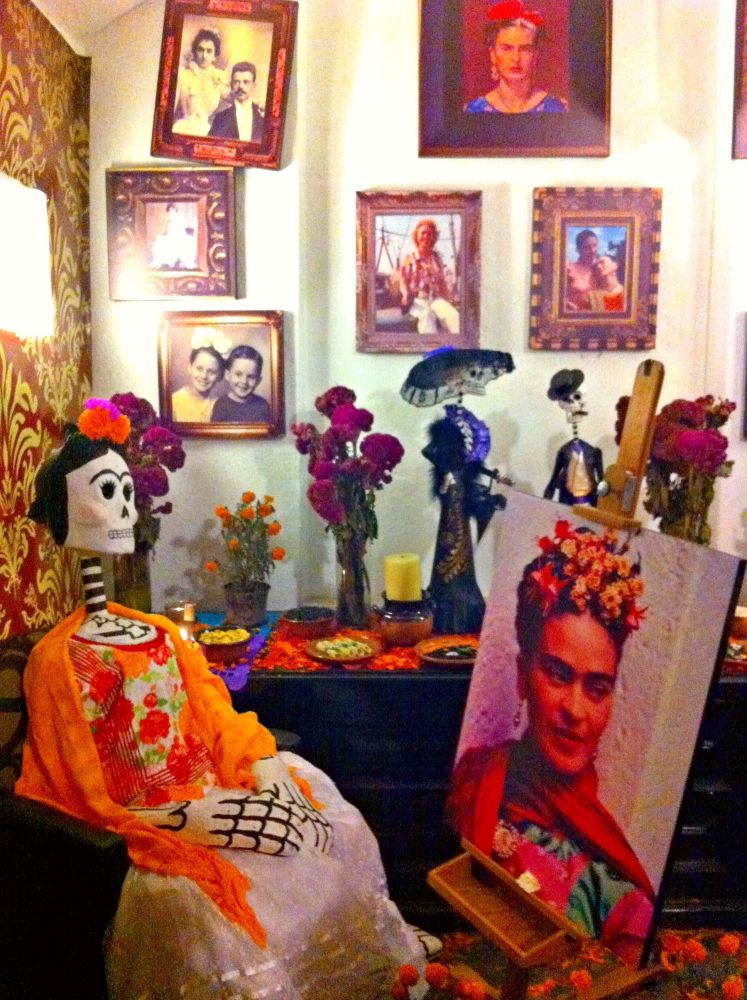 In Mexico City, celebrations are huge everywhere, but the best places to have a real local experience are San Andres Mixquic and Xochimilco. The first is a small and ancient town in the South of the city. There, thousands of people arrive to the graveyards on November 1st and 2nd with many delicious dishes, candles, sugar skulls and flowers. They also bring live music, such as mariachis or local bands, to cheer up the environment. People open the door of their houses in order to welcome the soul of their dead relatives and let them enjoy their altars.

On the other hand, Xochimilco offers a wonderful spectacle as you travel on its traditional wooden boats called “trajineras”. At night, these boats lead you through the canals to a small island where actors perform the very popular legend of the Weeping Woman. Along the way, you will see the canals lit up with candles and the yards of the local houses decorated with colorful altars and flowers, as you smell the sweet “pan de muertos” and other delicious dishes.

In addition, museums, streets, public plazas, churches, cemeteries and houses prepare altars and decorate according to the occasion. There are many contests for the best altar, as well as plays and other performances commemorating this day. Catrinas, marigold flower, colorful paper flags, skulls, skeletons, devils and many other related objects are found all over.

These are just some reasons for which you don’t want to miss this ancestral tradition in Mexico City. Not even the most surreal minds can fully imagine how this festival plays out: it is therefore essential for you to discover it yourself. Welcome to the liveliest celebration of death! 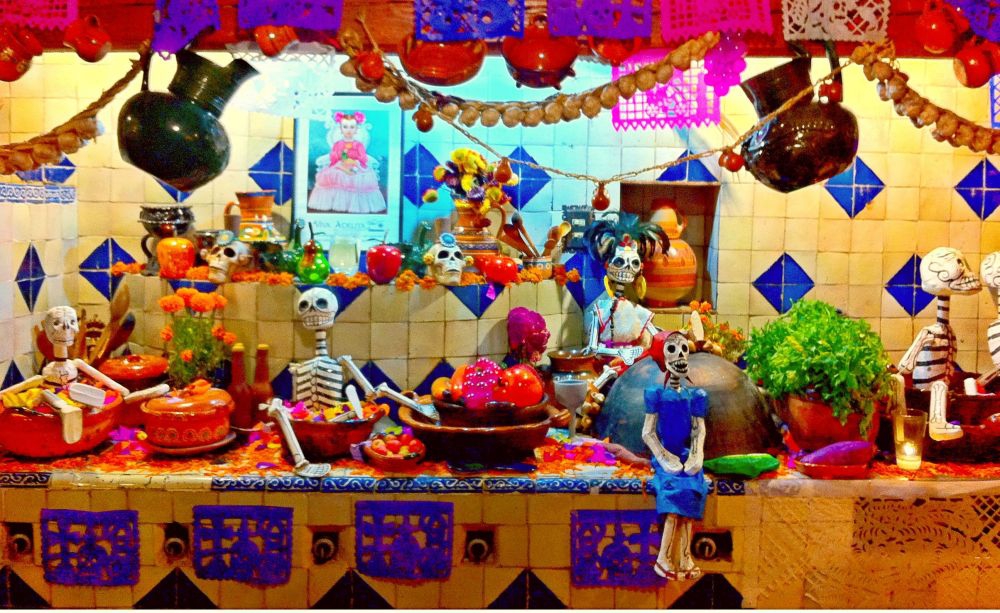