On June 28, 2014, Mexico City witnessed its 36th Gay Parade, formally known as the Historic March of LGBTTTI Pride. Although there are similar events all around the world, there are several characteristics that make this city’s parade unique. My Guide had the opportunity to sit down with Carlos Lopez (better known as Charlie among friends and acquaintances), a member of this year’s Organizing Committee, who painted a very complete and interesting picture of this movement.

Charlie is a respected sociologist from the National Autonomous University of Mexico (UNAM), as well as an activist for gay rights. Recently, he started an organization called Queer Mexico that publishes studies of sexual dissidence aimed at disseminating scientific knowledge to non-specialized audiences. It has gained recognition as it integrated a group of renowned columnists, including activists and intellectuals who specialize on LGBT topics, such as: Javier Lizárraga, Alonso Hernández Victoria, Antonio Medina, etc. 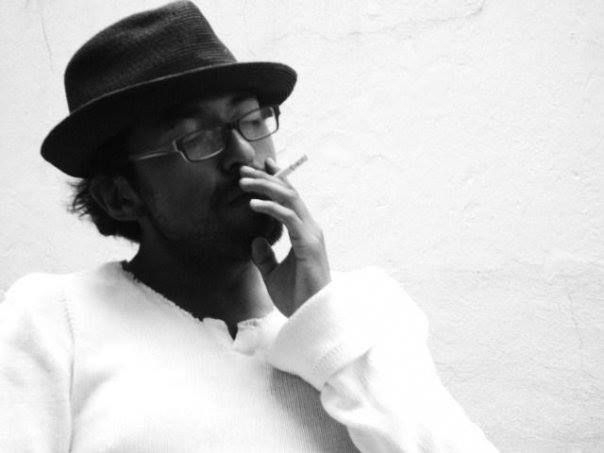 There exists different versions on the amount of people that marched in 2014; some newspapers mentioned 65 thousand, others said more than 90 thousand people attended. The official count by Mexico City’s Civil Protection established that 80 thousand people marched, “but they always tend to take away some 20-30%, we don’t know why”, says Charlie. The first contingent started marching at 11 am and the last one at 4 pm. Thus, for more than five hours, different contingents continuously joined the parade and Paseo de la Reforma (Mexico City’s main boulevard) looked crowded.

Nevertheless, according to Charlie, the organization of this year’s parade was intense and conflicted. He described that some people who had particular interests on this movement, decided to set up separate organizing committees. “In the end there were three different committees and a coordinator; it was a total mess!” At the last moment, the local authorities and the organizing committees sat down to negotiate and all of them joined forces to make the march happen. They realized that the cause was bigger than any particular interest. The different committees had different ending points and they all marched together in peace. “Out of the more than 100 thousand who attended the march, 99% didn’t know about these conflicts, nor how they started or who was involved”.

According to Charlie, there were more than 30 associations registered in this parade, among them various groups including: Cowboys; Lesbians; Muxes (a community of Oaxaca); the transgender coalition “T-47” (a coalition of 47 different groups from all the country and even from Guatemala); the recently born group “Bearded Mx”; Gay Guerrilla; Jews; Christians; Bears; groups of elders; “Metreras” (gays that use the Metro system); the Anarchic-queers…  all sorts of diversities! 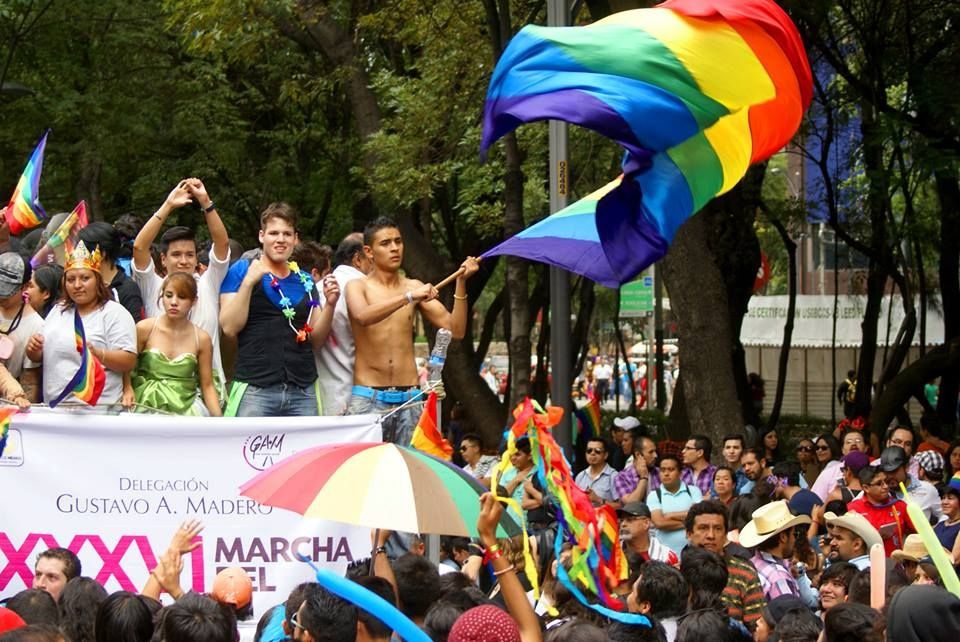 In the past decade, Mexico City’s LGBT movement has accomplished many goals. Sexual diversity is not anymore a taboo here. On the contrary, it has gained momentum since 2010, when Mexico City was the first territory in the country that gave legal recognition to same-sex marriages. From 2010 to 2013, 6,092 same-sex couples got married in this city. Nowadays, these couples are allowed to adopt kids, as well as to inherit or receive pensions from their partners.

In addition, there is a solid legal framework that protects LGBT people. For instance, article 5 of the Law for Preventing and Eliminating Discrimination in Mexico City establishes that any type of discrimination is forbidden, understanding it as “the denial, exclusion, differentiation, reduction, impediment or restriction of one or many human rights, groups or communities”, for reasons of ethnicity, gender, nationality or sexual preference, among many others. Significantly, in D.F. there is a “Law of Domestic Partnership”, which establishes rights and duties for same-sex couples.

These accomplishments have also had a national impact. This year, the National Supreme Court of Justice declared unconstitutional to refuse to recognize the marriage of a same-sex couple. In 2010, the National Supreme Court of Justice recognized same-sex marriage as well as the possibility of these couples to adopt kids. What’s more, last February 17, the law of Mexico’s Social Security Institute (IMSS) and the law of the Mexican Institute of Social Security and Services for State Workers (ISSSTE) were reformed to grant access to same-sex couples to these institutes’ services. Most recently, Mexico’s Federal Government declared May 17 as the National Day of Fight against Homophobia, a day recognized as such only in Mexico City since 2007.

When discussing with Charlie about the goals that this parade pursued, he admitted that “the legislative agenda is about to become exhausted”. Therefore, the question in Mexico City is “what’s next?” Charlie elaborated on the upcoming agenda of the movement: “Many of us are thinking about the necessity of not having to look at the formal institutions as the only interlocutor, but to turn to talk directly to the society. This means that we need to design public policies aimed at having a direct impact on the society, such as campaigns for education and awareness of sexual diversity that start in elementary school”. He affirms that the conservative groups’ success derives from the use of cultural tools to spread their messages, such as mass media, the Church, schools, etc., “their activism is social, and that’s something that we have not managed to do because we are only looking at institutions”. 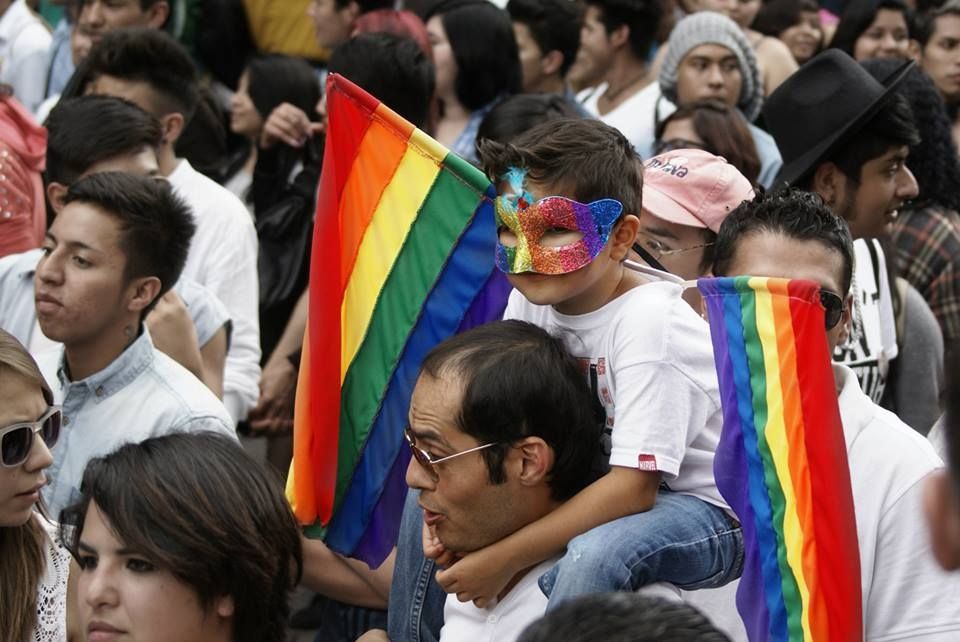 And it is true; there are still many goals to achieve especially when it comes about to disseminating the LGBT agenda to the broader society. According to Mexico City’s Survey on Discrimination of 2013, 89% of the local population admitted that gay community is highly discriminated. In fact, the person’s sexual preference is the third most common source of discrimination. What is more, in the last 20 years, more than 220 people have been victims of homophobic crimes.

Finally, when asked if the march is a protest or a party, Charlie says “It’s neither and both of them at the same time. It is something in itself, a symptom of sexual diversity”.

As Charlie describes it, Mexico City’s gay parade has gained national and international visibility. It was the second march of the continent after the Stonewall’s riots. This parade is not exclusive of D.F: “People from other provinces plan their trips with months of anticipation to come to this parade. The other states’ parades are organized in different days because they all know that the last Saturday of June is Mexico City’s parade”. It is neither exclusive of the gay cause: “In this parade, all sorts of diversities are present, being racial, cultural, social… It’s the only march attended by people from all strata, from all the socioeconomic levels and all ages”.

Therefore, after this interview with Charlie, something is clear. Mexico City’s gay parade is everything: it is party, protest, claims, market, culture, colors, music, folklore, costumes, art, creativity. It’s pride, it’s us!